G FORCE (F): Congratulations on the new release ‘Stormwater’. The album is very impressive, not only for the crew‘s lyrics and mic presence but the production which you handled.

To kick it off, how long did it take to get this album together, being that it was all recorded in Melbourne and the crew is Canberra based?

CIECMATE (C): Some of the tracks were recorded in 2001 and others were recorded more recently. Various members of the crew made the pilgrimage to Melbourne when they had time & we always had recording on the agenda. I also went to Canberra to record some verses with the crew. Stormwater was actually finished in July! However, Mexi has always got a lot on his plate so we had to wait till he had enough time to get the artwork done. That was a blessing anyway because it gave me more time to add the finishing touches on the album that make it what it is.

F: I think that people who are expecting an album that contains crew members who are involved in the Graff scene to make many references to the scene. However I found the album to be a lot deeper and diverse. Was this intentional or do you mainly keep the two things separate?

C: There‘s alot more to all of us than just our activities within hip – hop.

F: The track ‘You‘re Gonna Get Got‘ has a very nice concept, how did this track come about?

C: I wrote the beat & while I was playing it to Rhys, Newsense & Air Tight we came up with the concept of: Intangible forces that cause people to act in an irrational manner (Greed, Fear, Hatred, Corruption, Envy, Perversion, Love & Remorse.) Then we informed the others of the theme & they wrote verses to match. Scribes 1 also had a verse for the song. His theme was Madness (It was Ill as fuck!) which he recorded & sent from China, however, the audio was fairly distorted & there wasn‘t enough time to re-record and mix it so we had to leave it out (Maaaaaaaaad pity!)

F: Tracks such as ‘As The Days Grew‘, ‘From Where I Sit‘ from Stormwater and ‘Type Cast‘ from COK3 express your views of the Government and society in general. These tracks show a very strong viewpoint towards them; do you keep up to date with many social issues?

C:I keep up to date yes. But I don‘t obsess on the state of society & let it dictate how I run my life. I was raised with my own set of morals and standards & they seem to work well enough for me to be able to live in this crazy world we all share.

In my humble opinion, government‘s worldwide appear to be the most organized crime outfits run by some of the most incompetent buffoons made available. With that being said; I vote, I drink, I get high & I‘ve done things that I was taught not to. We all play our part in society‘s evolution, some more than others. I just choose my path, follow it through to wherever it leads & catch the views along the way.

F: So, what did you aim for people to take away from the album. Simply a pleasurable listening experience or a bit more?

F: Some people were expecting a few more tracks, was it simply a matter of quality over quantity for the release?

C: Nah – Most good things that last for only a moment, make you want more. So I kept the album short & sweet.

F: Let‘s put you on the spot. Who do you think in the crew possesses the skills to stand out above the rest?

F: So, in a normal Hospice get together, be it for recording or otherwise what occurs?

F: Yourself and Newsense combine very nicely on the half dozen tracks you have done together, is there any collaboration or solo albums in the works for any crew members?

C: Funny you should say that. Yeah there‘s gonna be a Ciecmate & Newsense album sometime in the next “However long it takes”, we’re also gonna put out a 12″ with some solo songs. Pretty much everyone in the Hospice crew is gonna get busy with some new material. Of course there’s also the VISITING HOURS lp (Possee cuts and Features only) which will be out mid 2004. Keep your eyes peeled. 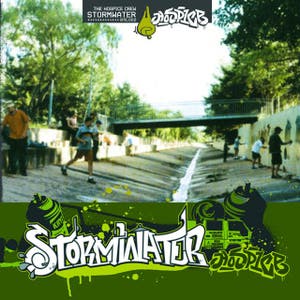 F: Let’s talk on production. You self produced the whole album, was this going to be the way it was from the start, always a Ciecmate produced Hospice album, keeping it within the crew?

C:It wasn’t really planned like that, it just took shape that way in the end! Newsense, Paranoia & Gala all make Ill beats too. They just didn’t have any that we used on this album, but stay tuned.

F: The album goes through grimy loops to more upbeat tracks such as ‘Top Shelf’, where do you get inspiration from for beats?

C: Situations, samples, movies, people, experiences & a whole gang of dope music that I’ve had the pleasure of hearing over the years.

F: You are seen as one of the nice hard working people within the scene and appear on everyone’s covers somewhere from Pegs to Drapht down to the up and comers such as Litigate. You seem to be everywhere Ciecers, what drives you to keep going?

C: Not a Limousine that’s for damn sure!!! Nah, I love what I do & I enjoy meeting new people (Especially when they’re hot chicks!)

F: Full length crew release, successful first release in Tornts, Record Label. Is this where you saw yourself going and what else do you want to achieve?

C: Yeah, I’m well on my way to where I want to be. I’m gonna travel more and see where I can take me.

F: So who is signed or working with Broken Tooth Entertainment, Future releases etc?

C:Tornts, Hospice crew & a string of associates. You’ll just have to wait & see.

F: So will the people be seeing anything live from the crew shortly?

C: We’ve already held a launch in Canberra (It was off the hinges!) Melbourne launch should be in February and then we’re going to organize launches in every state that will have us. Promoters can feel free to get in touch with me on: ciecmate @ yahoo.com.au

F: Any last shout outs, thanks or anything at all you would like to add?

C: Cheers to all the heads who made me and my crew feel welcome where we were strangers. Anybody who bought a copy of the album!! You’re a champion!

F: Thanks for your time Ciecmate!

C: You’re welcome Mr-Force, the pleasure was all yours!! Hehehe.

You can peep the album review here for Hospice Stormwater – http://www.ozhiphop.com/forum/viewthread.php?tid=15796

And download the MP3 for ‘Youre Gonna Get Got” from the ozhiphop.com frontpage (No longer available).